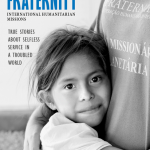 The aims of the Fraternidade missions are to do good and bring peace to people and to the Kingdoms of Nature.
In order to do so, its volunteers have been in seventeen countries relieving the sufferings of Latins, Africans, Asians,
Europeans. An instructive and ethical portrait of our times, this book uncovers stories and reflections of the travelers.

They love without indoctrinating or imposing anything on anyone. On the contrary, the missionaries encourage the cultural manifestation of the people, the faith and talent of each individual.

Today they dedicate themselves permanently to Venezuelan indigenous and non-indigenous migrants, in the North of Brazil and Colombia, as well as to occasional international missions.

In environmental catastrophes, they supported Chileans in the biggest forest fire ever in that country, Argentine natives who have been victims of floods, a Uruguayan city devastated by a tornado and also Brazilians after the breaking of two mine tailings dams.

This report unveils mysteries of the nonsectarian work, which was started in Minas Gerais, Brazil, where the Fraternidade headquarters are located. During tender, miraculous or dramatic experiences, the servers practice being fraternal while assisting an Egyptian baby, an elder in Nepal, the wretched of Africa, Syrian, Afghan and Iranian refugees in Turkey and Greece, as well as South American ethnicities.

Roll up your sleeves, dear reader! They are destroying the planet, and you can help us look after one another.
Inspiring us to healthy restlessness, this book invites you for the sake of the human family.